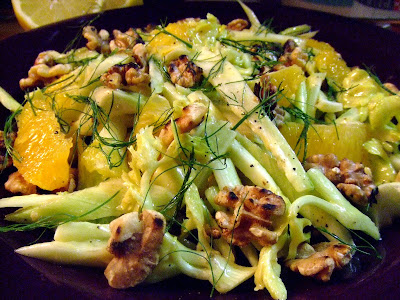 It’s August and it’s hot. Too hot to cook. And produce is at its peak so what better time to make some delicious, healthy salads?

I usually stick to my default salads: romaine lettuce with tomatoes, raw kale with simple dressings of extra-virgin olive oil or safflower oil with balsamic vinegar. Actually, for me those salads are sort of new and adventurous. I grew up eating iceberg lettuce with cucumbers and celery. There would be tomatoes in the salad but I hated tomatoes. My mother always said that would change when I got older and guess what? She was right. Salad dressing was always oil and apple cider vinegar. Later we branched out to red wine vinegar but that was pretty much the extent of our experimentation.

Several years ago I went for lunch with some co-workers at a restaurant that would be described as “quaint” or “charming.” The salad was mesclun – what I then called “lawnmower clippings” – and the dressing was raspberry vinaigrette. I didn’t want it.  I wanted a “real” salad. One of my co-workers teased me that I was a “real Bronx girl” wanting my iceberg lettuce with plain dressing. I replied, “So?” and then I stabbed her with my salad fork! No, just kidding. 🙂

But in the spirit of my “let’s keep trying new things” campaign, I made two salads that are way out of my usual comfort zone.

The first is a Mediterranean Salad. Spicy arugula instead of lettuce. Roasted red peppers, black olives, red onions, celery and chickpeas make a delicious combination. Instead of my usual “oil and vinegar” dressing, I made a sun-dried tomato vinaigrette. That is really different for me, not only because I don’t normally make vinaigrettes (though I have totally learned how to spell the word), but because of the varied ingredients like sun-dried tomatoes and lemon. I have always hated lemon!  It is so much fun to watch my palate evolve as I discover so many incredible new taste combinations.

The second is even more “way out there” for me as I have this unspoken but often-said rule about not liking fruit in my food. But when I was a kid, we used to eat fennel all the time, raw, as a snack. It tastes like licorice. So I decided to make a fennel salad. Just fennel and celery. No lettuce at all!That took care of my “it’s not a salad if it doesn’t have lettuce” thinking.

Then I went REALLY crazy and added orange segments! FRUIT IN MY SALAD! And toasted walnuts! And since I was already over the edge, I made a dressing with mustard, LEMON JUICE (again) and agave! I hardly ever put sweeteners in my food. And you know what? It was one of the most incredible salads I ever had, not to mention amazingly pretty (though I just did).

It just proves to me again that I should never say I don’t like a certain food and then avoid it. I used to hate tomatoes and now I love them. I always hated lemons and lately, I’m eating them all the time. Right now, I’d love a big bowl of “lawnmower clippings” …but I’m not quite ready for the raspberry vinaigrette…yet. 🙂 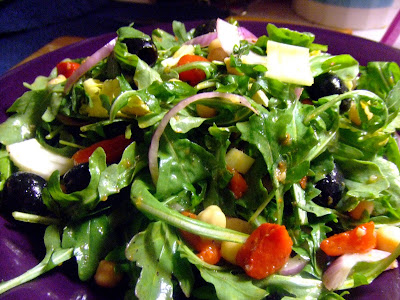 For the Sun-Dried Tomato Vinaigrette 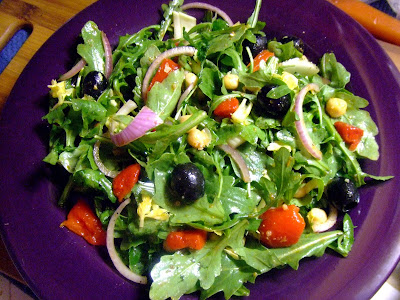 Combine all ingredients in a large bowl. Drizzle with dressing.

For a variation, you can add vegan feta cheese crumbles. 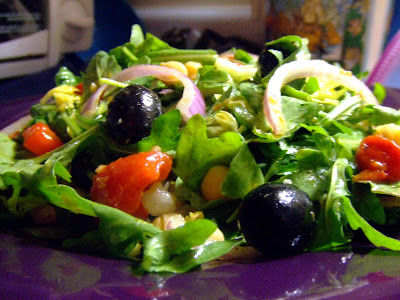 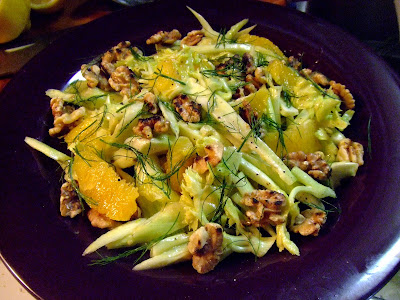 For the Agave Mustard Dressing 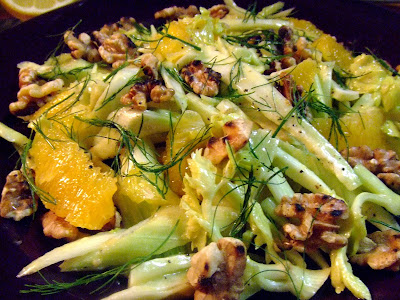 Combine ingredients and toss with dressing. Garnish with fennel fronds. 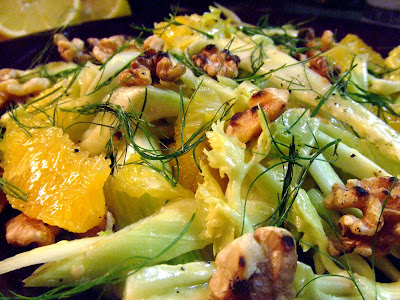