By Rhea on April 27, 2012 in Burgers, Sandwiches and Tortillas, Recipes 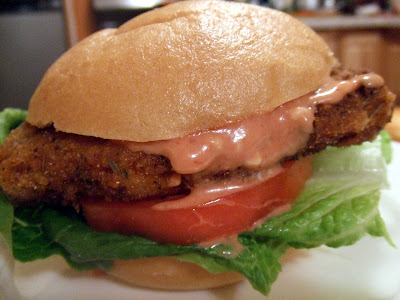 As you probably know, most of the recipes on this blog are gluten-free. When I read how a gluten-free diet can help autoimmune disorders by reducing inflammation, I tried it out. At first I didn’t do it consistently and not surprisingly, I didn’t feel any difference. But when I got serious and completely eliminated gluten from my diet, the difference was amazing! So many uncomfortable feelings disappeared and my body thanked me for the change.

But every once in a while, not often, but maybe once every couple of months, I cheat and eat something with gluten. Maybe it’s because I’m out at a restaurant and I really want the seitan or they just don’t have gluten-free and vegan options for me. It can be a hard combo to find when you eat out. Other times it may because I’m craving something “bad.” That usually means something processed or bread or both. That’s usually an emotional craving begging for comfort food.

Since I don’t have Celiac Disease, I can cheat once in a while (people who have Celiac’s or gluten allergies should NEVER cheat) although I do pay for it the next couple of days. Well, the other day Tom and I were grocery shopping after a particularly stressful morning. Usually our cart is filled up by the time we leave the produce aisle but I also like to stock up on frozen veggies. So there I am in the frozen section when I hit the very small area of vegetarian/vegan offerings. And I just happened to have a coupon for “any Gardein product.” What could I do? The coupon was going to expire at the end of the month so it wasn’t my fault. I had to buy something. You understand, right?

There is actually only one Gardein product that I love enough to cheat with and that’s the Chick’n Scallopini cutlets. To me, they are a blank canvas, the vegan version of chicken cutlets which were once my very favorite food. You don’t just buy them and heat them up. No! That would be wrong! They want to be grilled, sliced and put in fajitas or salads. They want to be cut into chunks for Asian dishes or a cacciatore. And most of the time, they are begging me to dredge them, bread them and fry them up into a compassionate version of the fast-food chicken sandwiches I used to love to eat no matter how loudly my arteries and my waistband protested. 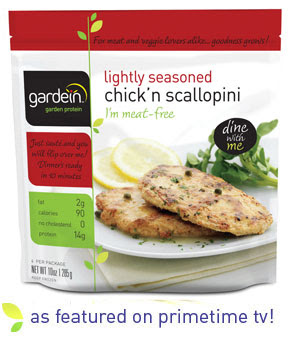 It was just one of those days I needed the comfort food fix so the Gardein went into my cart and later that evening, into my belly. I did try to offset the damage by using gluten-free flour and crumbs (crushed rice cereal makes a panko-like coating) and I did serve them on gluten-free rolls. The dressing was a simple ketchup/vegan mayo mixture. It was delicious. Of course, the same recipe can be used with tofu or tempeh but sometimes I just need to give in to my craving (as long as it’s vegan; there’s NO cheating in that respect. EVER!)

So here it is: my Double-Dipped Gardein “Chicken” Sandwich. You can even go extra-crazy and make a double Double-Dipped Sandwich. Or top it with tempeh bacon. Mmmm….Then get back on the wagon! Enjoy! 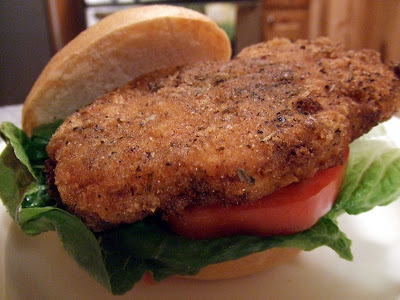 Pan fry the cutlets until browned and crisp on each side, about 4 minutes per side. While they are frying, toast the buns or rolls. Assemble the sandwich by placing a cutlet, lettuce and tomato on each bun bottom. Slather the bun top with dressing, top the sandwich and enjoy! 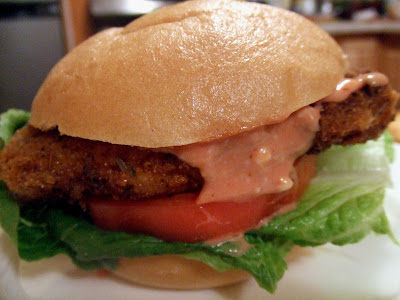 Tofu Francaise with Linguine
Yesterday I Missed Being Fat