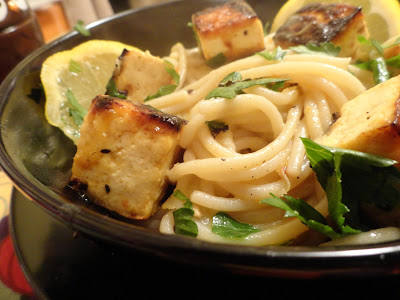 The “V” Word continues its celebration of VeganMoFo, the vegan month of food, with its theme “If TV Celebrity Chefs Went Vegan.” Today I’m writing about Melissa d’Arabian for the simple reason that I like her.

Melissa d’Arabian was the winner of Season 5’s Food Network Star (I predicted that) and now hosts Ten Dollar Dinners on Food Network and Drop 5 lbs. with Good Housekeeping on The Cooking Channel. She recently released her 1st cookbook: 10 Dollar Dinners: 140 Recipes and Tips to Elevate Simple, Fresh Meals Any Night of the Week. 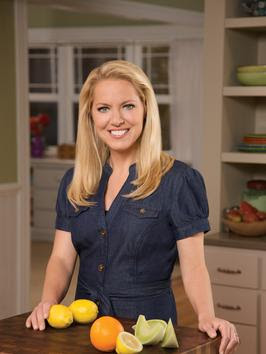 I enjoy watching Melissa’s cooking show. Her recipes are simple yet thoughtful and easy to veganize. Melissa has a warm, friendly personality – you could imagine hanging out with her, chatting over coffee and cookies. She’s also thoughtful about vegetarian dishes.

In fact, today she was making baked beans and she used an “unchicken” vegetable broth while chatting about how her nephew is vegetarian and she often uses this ingredient when she cooks for him. She went on to say how important it is to make vegetarian dishes for company so everyone has something to eat. It was the first time I ever saw anyone on a non-veg cooking show mention “unchicken” vegetable broth and it was very cool! Usually, I’m watching someone add chicken broth to a vegetarian dish and end up yelling at the TV screen, “CHICKEN BROTH IS NOT VEGETARIAN. IT’S MEAT!!!!!!!!!!!!!!!”

Mainly, I like Melissa because I admire people who overcome adversity and turn their struggles into strengths.  Melissa was raised by a single mother who was putting herself through college and medical school. Money was tight and Melissa was taught to clip coupons and never waste food, a lesson that stuck with her and today is the theme of her cooking show.

Sadly, her mother committed suicide when Melissa was just 20 years old. Still she went to college, got her degree in political science and then got a job I dreamed of as a child – she became part of the entertainment staff on a cruise line. When I was a kid and people asked me what I wanted to be when I grew up, I would say, “I want to be Julie, the activities director on The Love Boat.”

After earning an M.B.A. and building a career in finance, Melissa got married, had 4 beautiful daughters and decided to become a stay-at-home mother. With only one income, the budget lessons she learned from her mother came to her rescue. She began making her own yogurt which saved her over $1000 per year. She made a video of how to do it which became wildly popular and the rest is food TV history.

She actually brought me to tears on the episode of Food Network Star where she revealed the truth about her mother’s suicide. Each contestant had to present their dish and talk about themselves. With tears in her eyes and her voice breaking, Melissa said (and I’m paraphrasing here), “Maybe this isn’t what I should be doing but if I’m going to fail, I would rather fail doing something I love.” I was hooked. Melissa believes in “the power of the family meal, nourishing the body and the soul, cooking for the person and not the plate.” She is strong in her faith and strives to live life with meaning and purpose (that is very near and dear to my heart). Melissa is very active in the American Foundation for Suicide Prevention. 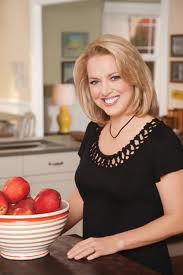 For my post, I could have chosen from dozens of Melissa’s recipes (she has so many good ones) but I had a box of Sophie’s Kitchen Vegan Prawns and I wanted to try them out. One of my favorite pre-veg dishes had been Shrimp Scampi so I decided to veganize Melissa’s version.

Sophie’s Kitchen makes many vegan “fish” products. Some are gluten-free and some (the ones with breading) are not. Some are pretty good and some are just ok (the vegan shrimp tastes better than the bigger prawns; those are the only kinds I’ve tasted). 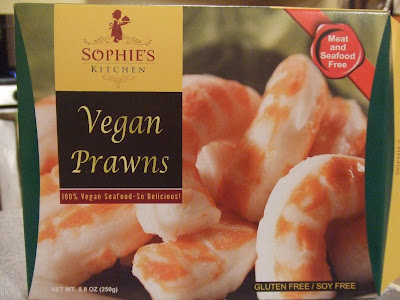 Last year I won some coupons for free Sophie’s Kitchen products (during VeganMoFo) but my local natural foods store didn’t carry them. When I asked if they could get them in, I was told no and that it was “weird.” I argued with the owner but to this day, they still don’t carry them. If I want them, I have to buy them online. But I don’t buy them often because they really, really look like shrimp and it just creeps me out. I mean, you could easily fool someone into thinking it’s really shrimp although it doesn’t taste the same. If you ever ate shrimp, the vegan stuff tastes like overcooked shrimp. It’s much better-tasting with the breading plus you don’t have to see the little pink shrimp look-a-likes.

So I made the dish once with the Sophie’s Kitchen vegan shrimp but the pictures were so creepy to me, I didn’t want to subject my followers to lots of them so I made the dish again with tofu. And you know what? It tasted so much better.

The tofu is marinated in garlic, oil, lemon and red pepper flakes and then cooked to a golden-brown perfection. Then it’s added along with pasta to a delicious sauce made with the marinade, white wine and more lemon. It’s creamy, garlicky, lemony and zesty. It’s vegan and of course, gluten-free.

My Tofu or Vegan “Shrimp” Scampi is an elegant dish that is perfect for a special occasion yet very fast and easy to make. I bet you could even make it for less than $10. Enjoy! 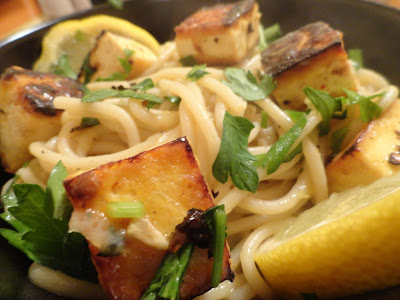 Zest and juice of one lemon

In a bowl, combine the ingredients for the marinade. Let the “shrimp” or tofu sit in the marinade for at least 30 minutes.

Meanwhile, bring a large pot of water to a boil. Add salt and cook the pasta according to the package directions. Reserve about ½ cup of pasta water. Drain and set aside.

Add the pasta to the sauce and toss to coat. Add the “shrimp” or tofu back to the skillet to heat through. Top with vegan grated Parmesan. Serve with extra lemon wedges, if desired. 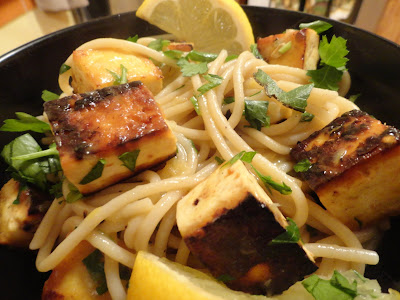