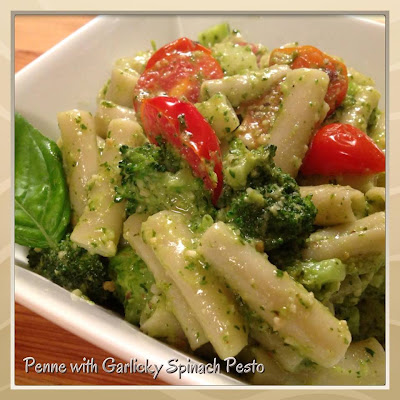 Today is the hottest day of the year so far, says the TV weatherman. I wouldn’t know except that Benny came back from his walk with his tongue hanging down by his feet. Now he is laying on the floor beside me, already asleep after his very short walk.

Days like today call for meals that are light, bright and easy. This pasta dish fills all those requirements. The pesto takes less than 5 minutes to make.

I like my pesto a little heartier than just basil so I use mostly spinach. I throw in some basil and mint for that brightness and distinctive fragrance. Walnuts are my nuts of choice for pesto. It’s a good idea to make extra pesto since you can keep it in the fridge and use it a million ways all week – as a spread for sandwiches, on crostini or like here, as a pasta sauce. 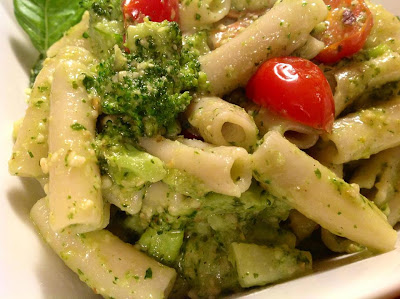 Broccoli makes the dish heartier and the grape tomatoes add a burst of flavor and color. My Penne with Garlicky Spinach Pesto Sauce, served with a tossed salad, is the perfect meal for a summer day.  Enjoy! 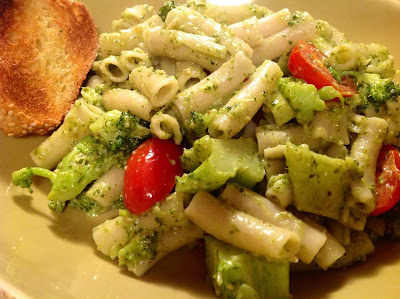 For the Spinach Pesto

3 cups fresh baby spinach
1 cup fresh basil
¼ cup fresh mint
½ cup walnuts
4 cloves garlic
Zest of one lemon
1-2 tsp. fresh lemon juice
2 Tbs. vegan grated parmesan or nutritional yeast
¼ cup extra-virgin olive oil
For the Penne in Pesto Sauce
1 lb. gluten-free penne
Kosher salt
1 Tbs. extra-virgin olive oil
2 cloves garlic, minced
2 heads of broccoli, chopped into bite-sized pieces
15 grape tomatoes, halved
Fresh basil, for garnish
Grated vegan parmesan, for garnish
To make the pesto: Combine all ingredients except the olive oil into a food processor. Process while streaming the olive oil in, until the pesto is smooth. If you want it looser, you can add more oil or water but you will be adding pasta water into it later. Taste for seasoning. Transfer the pesto to a bowl and cover it with plastic wrap. Make sure the plastic wrap touches the pesto so a skin won’t form on it. Refrigerate until ready to use.
To make the penne: Bring a large pot of water to a boil. Add a handful of salt and the penne to the pot. Stir and cook until the penne is just shy of al dente. Reserve a cup of pasta water for the sauce. Drain the penne and return it to the hot pot.
In a deep skillet, heat the olive oil over medium heat. Add the garlic and cook until slightly browned. Don’t burn the garlic. Add the broccoli to the pot and toss to coat in the garlic and oil. Add the grape tomatoes and a sprinkle of salt. Cook until the broccoli is browned and tender and the tomatoes have softened.
Add the pesto to the skillet along with some of the reserved pasta water. Stir and let cook until the pesto is heated through, about 3 minutes. Add the penne to the skillet and toss to coat with the pesto sauce. Let cook until the sauce is thickened and clinging to the penne. Serve in bowls and garnish with fresh basil and grated parmesan. 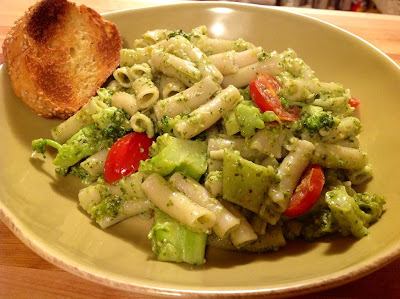