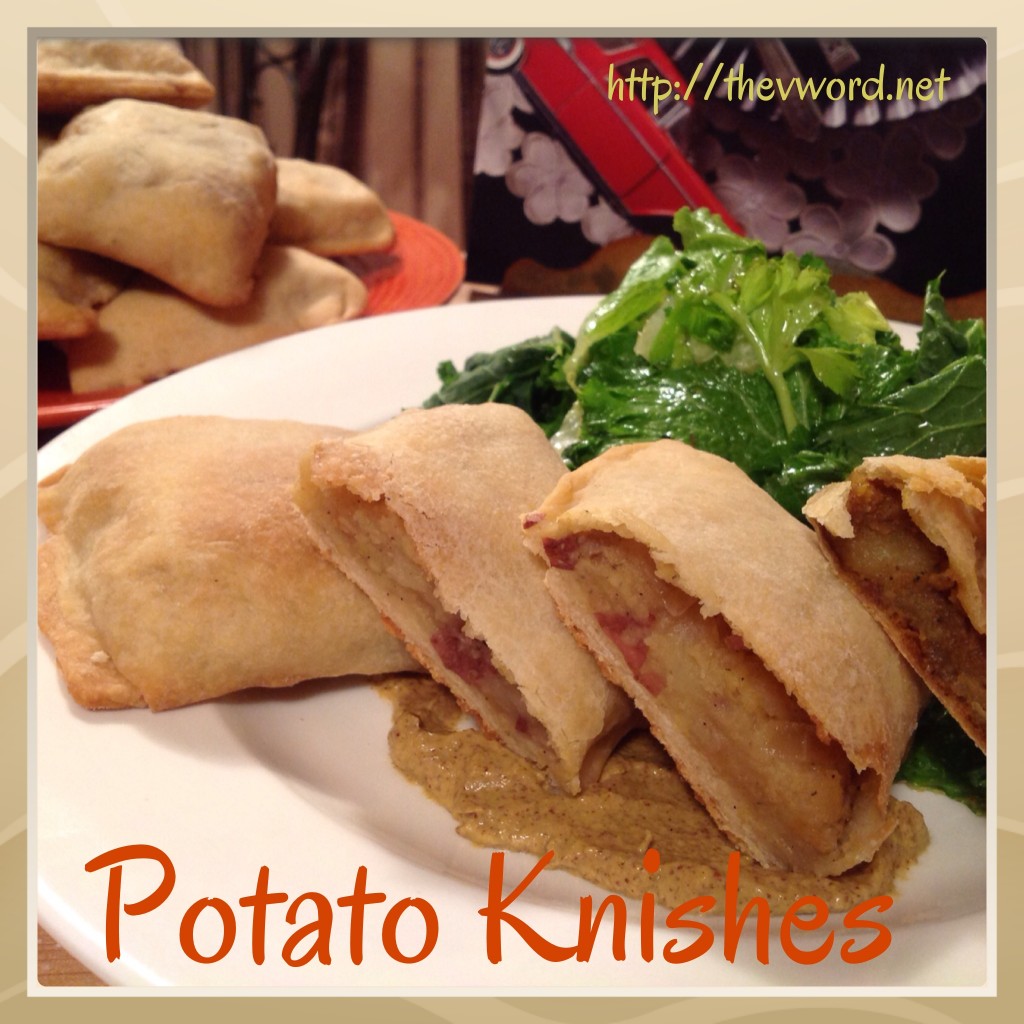 Lately I have been craving a lot of the foods my mother used to make. A few weeks ago I started thinking about her potato knishes. Oh, how we all got happy when Mom made knishes!

When Mom got busy making something like knishes, she made enough to feed an army. She brought some to her co-workers, we ate a bunch and some went in the freezer. Mom had the attitude that if you’re going to bother doing the work, you might as well do a bunch. 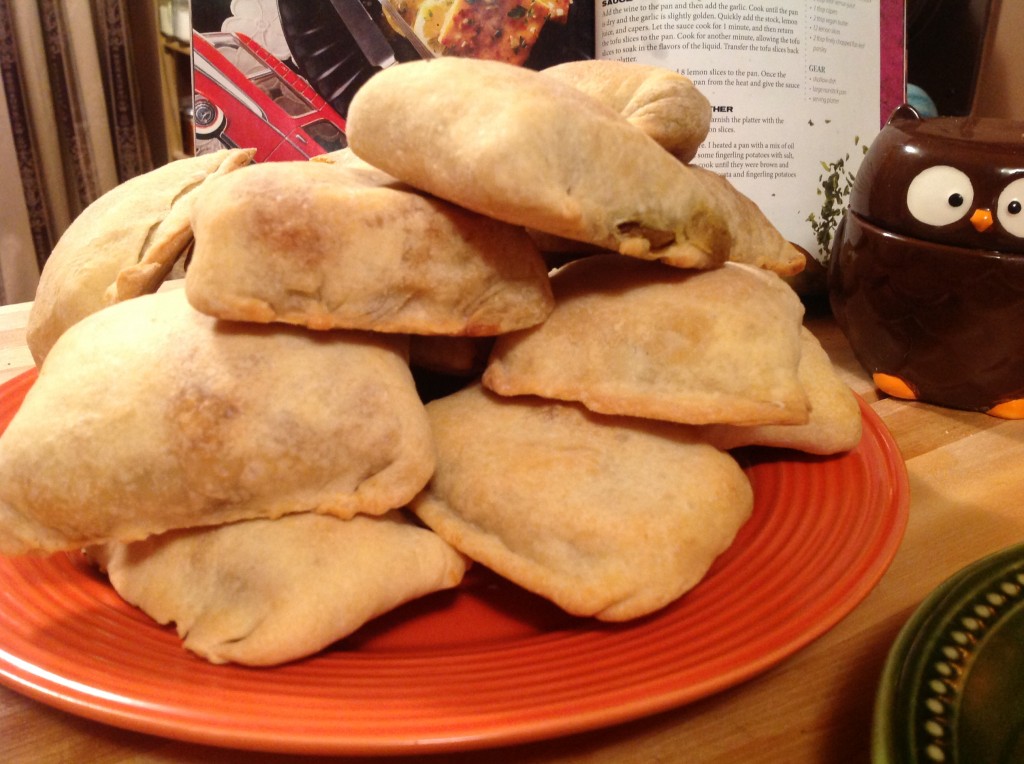 I don’t remember a lot about how she made them but I remember her rolling out the dough on the kitchen table that she covered in torn-open grocery bags (the parchment paper of my childhood). My job was to mix the onions into the mashed potatoes. I used to taste the creamy potato mixture and wonder why we couldn’t just eat it like this straight out of the bowl. Who needed dough? While I was making my knishes, I tasted the filling and thought the same thing. I guess some things never change.

As with many of the dishes my mother made, she ruined knishes for me if they were made by anyone else. I remember the first time I saw a knish that wasn’t Mom’s. We were at a kosher deli and there were knishes in the showcase. I looked at them and said, “That’s not knishes!” You see, my mother made her knishes with a biscuit-type dough. They were kind of crispy, flaky and so delicious. The knishes I saw in the deli looked soft, not crispy. The dough didn’t even look like dough, it looked more like a breaded potato patty. It turns out that this is what knishes look like whenever I see them – on food carts and trucks, in restaurants, everywhere. That means I can’t enjoy a knish anywhere. Well, I can but I don’t think of it as a knish. I think of it as a potato patty, soft and yummy, but not Mom’s. 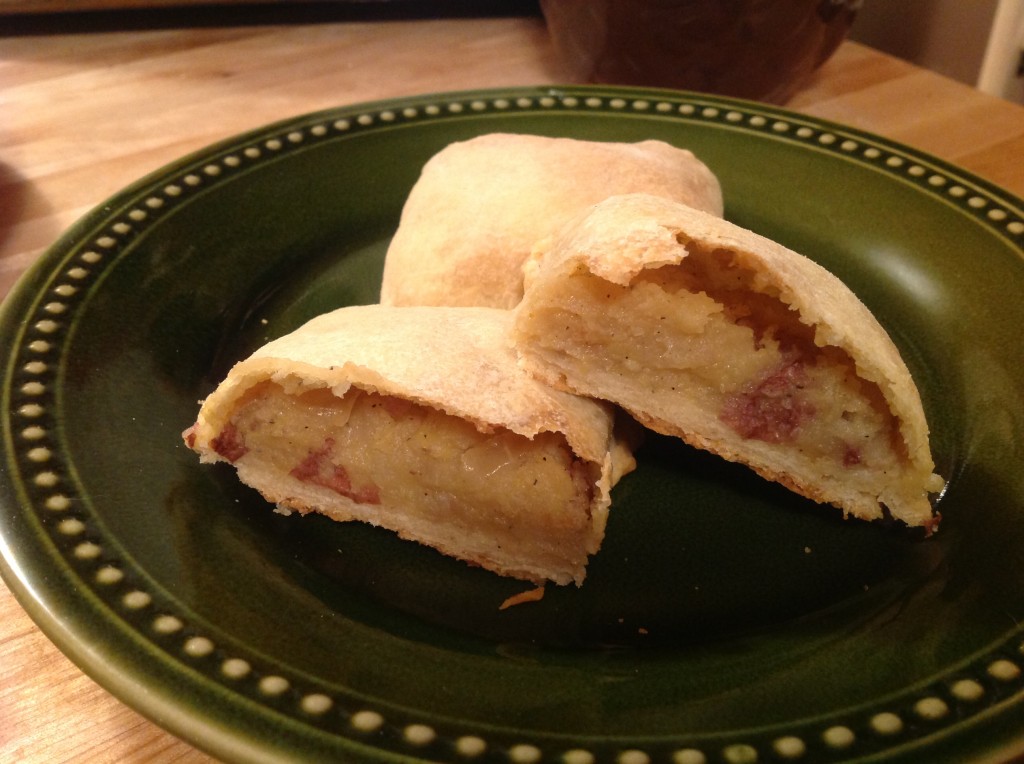 So I set out to make my own and I wanted to make them like Mom’s. Since it was my first attempt, I didn’t make them gluten-free but the same recipe would work for gluten-free knishes. Just use an all-purpose gluten-free flour mix and add 1 1/4 tsp. guar gum or xanthan gum. A gluten-free dough might need a little more oil to make it pliable.

Tom and I had fun pounding out the dough, stretching it into shape and cutting the dough with our hands. The process went faster the more we did it and got used to it. I made sure to take pictures along the way to help me explain the steps.

You can fill your knishes with whatever you want but I wanted the classic potatoes and onions. I did, however, sneak some of the mashed potatoes to the side and added Indian spices to make a few Indian knishes which are really samosas.

The knishes were soooo good. Soft, creamy, onion-y potatoes surrounded by crispy, flaky dough. We topped them with brown mustard and devoured a bunch of them for dinner with a salad. They tasted just like my Mom’s. I love when that happens because it feels like I get back a piece of my childhood. 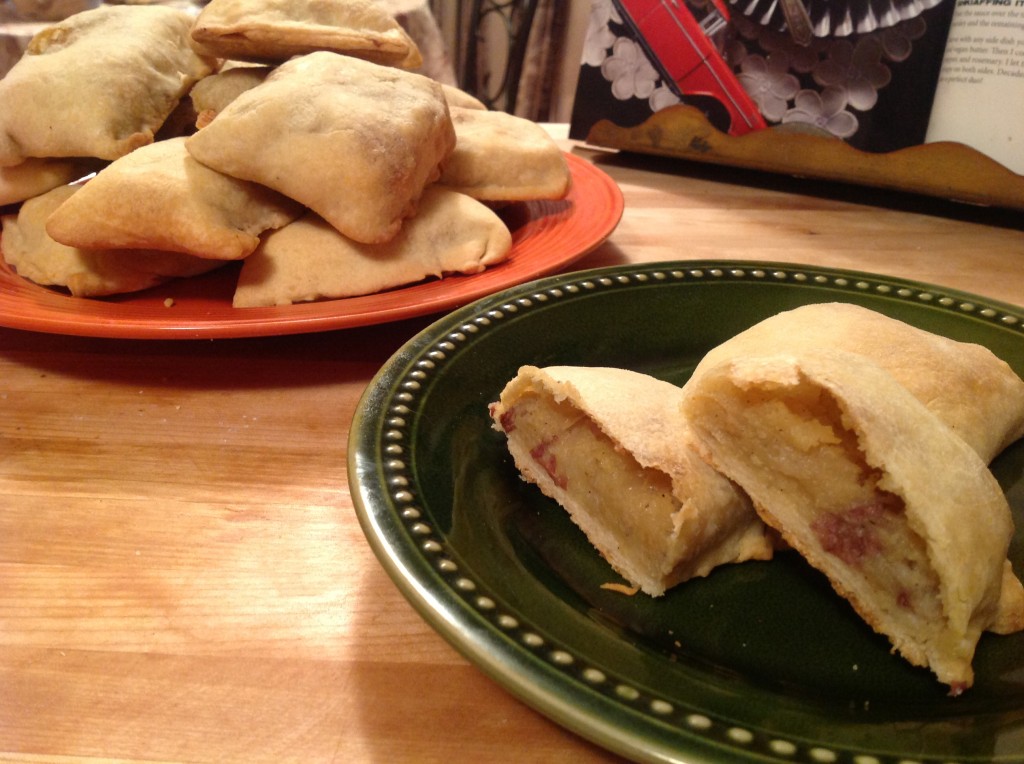 These would make a big hit on your holiday table no matter what holiday you’re celebrating. They work as an appetizer, a side dish or even an entree. I know my Mom’s and now my Potato Knishes will be on my table this holiday season. Enjoy!

¼ cup seltzer plus more if needed

To prepare the Knish Dough: In a large bowl, combine the flour, guar gum or xanthan gum IF using gluten-free flour, salt, baking powder and sugar. Mix well and make a well by pushing the dry ingredients to the periphery of the bowl. In a small bowl, mix the egg replacer with the warm water and stir well. Add the oil and vinegar and whisk. Add the seltzer and gently mix it in. The liquids should be nice and bubbly.

Pour the wet ingredients into the well of the dry ingredients. Using a wooden spoon or a rubber spatula, slowly mix the dry ingredients into the wet, incorporating more and more with each turn of the bowl. Mix until it starts to form a dough and then use your hands to knead it into a firmer dough. The dough should be smooth. If it feels too dry, add seltzer, one Tbs. at a time. If the dough feels sticky, add a drop more flour. When the dough is smooth, divide into 3 balls and cover them with a damp towel. Let them sit for 30 minutes to relax the dough. While the dough is resting, make the filling.

To make the potato filling: Cut the potatoes into even chunks. Put them in a medium-sized saucepan and fill with water until it just covers the potatoes. Add a pinch of salt, cover the pot and cook over medium-high heat. When the water comes to a boil, remove the lid, lower the heat and let the potatoes cook until they are fork-tender, about 20 minutes.

While the potatoes are cooking, heat the oil in a skillet (that has a lid) over medium heat. Add the onion to the skillet and, cover the pan and let cook for about 25 minutes. Stir the onions a few times during the cooking process to make sure they are not browning too much. You want them soft and a bit caramelized. When they are soft, sprinkle a bit of salt over them. Set aside.

When the potatoes are fork-tender, drain them and mash them until they are soft and smooth. Fold the onions with any remaining oil into the potatoes. Season with salt, pepper and garlic powder. Set the potato filling aside until you are ready to make the knishes.

To make the knishes: Preheat the oven to 350 degrees. Line 2 large baking sheets with parchment paper. Prepare a work surface with parchment paper for rolling out the dough. Pour some oil in a bowl and have it ready with a pastry brush. Take one of the dough balls out from under the damp towel. Pound it with a rolling pin until it’s flattened out. Hit it, get all your aggression out, think of someone who bugs you and flatten that dough!

Then stretch it and roll it until you have a thin rectangle, about 10 x 12 inches. You can use a paring knife to trim the dough and have a real rectangle shape. Put any trimmed dough back under the towel. 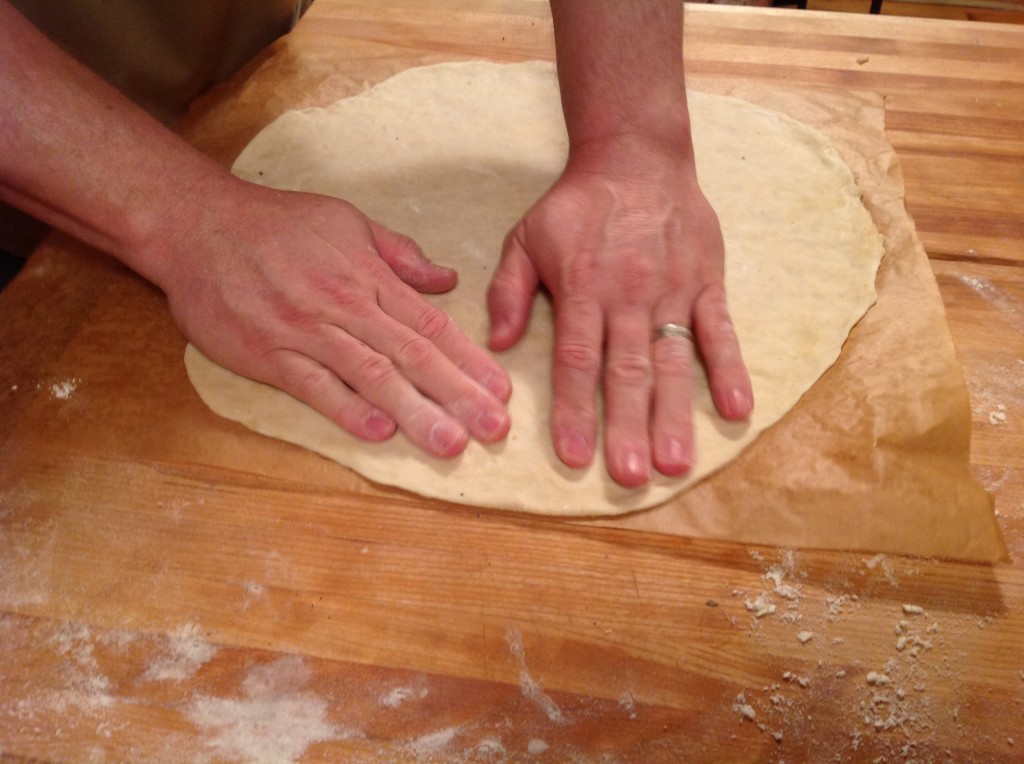 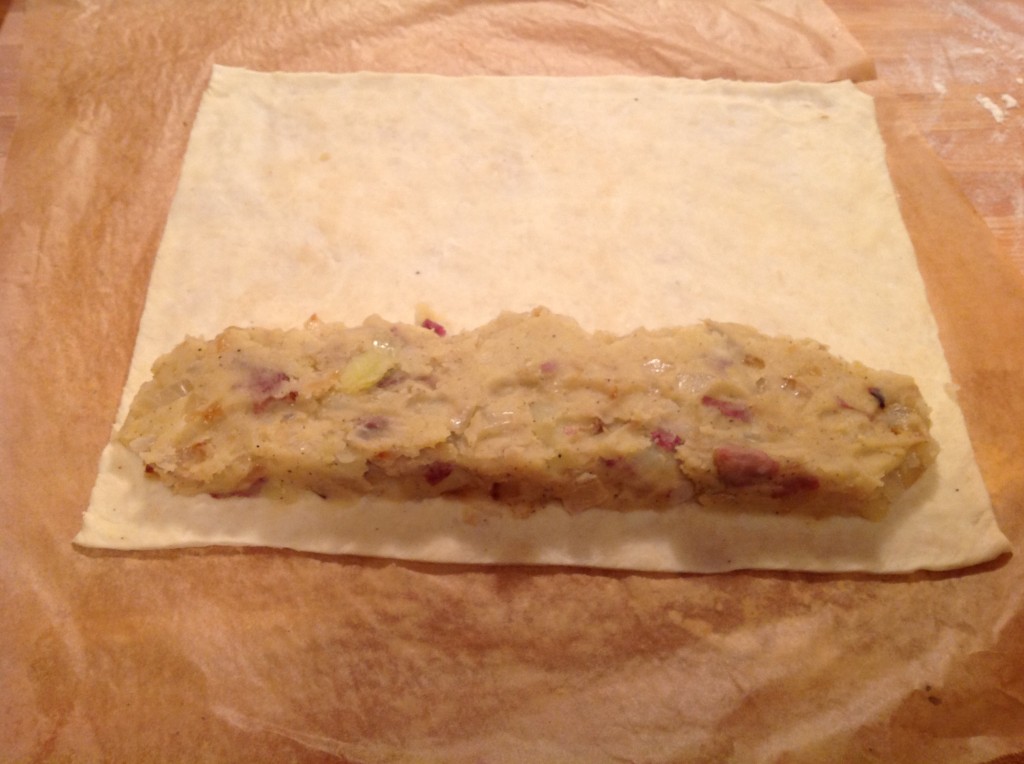 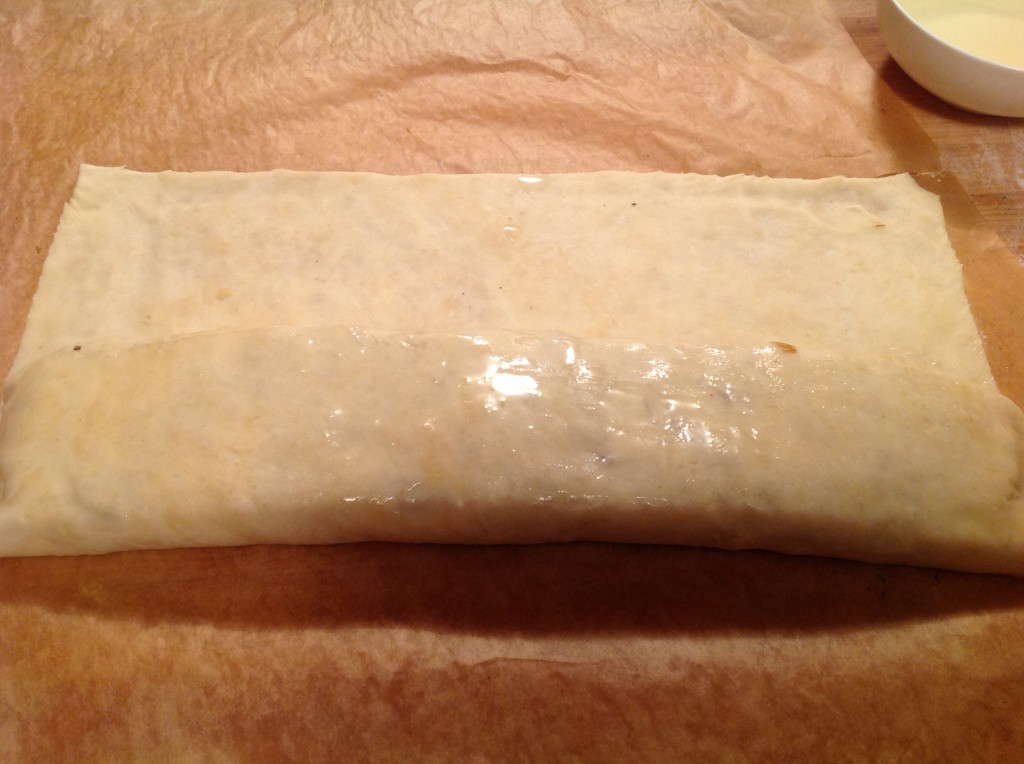 Roll the dough again until you have come to the edge of the rectangle. The seam should be on the bottom. Pinch the ends of the dough to seal them shut. 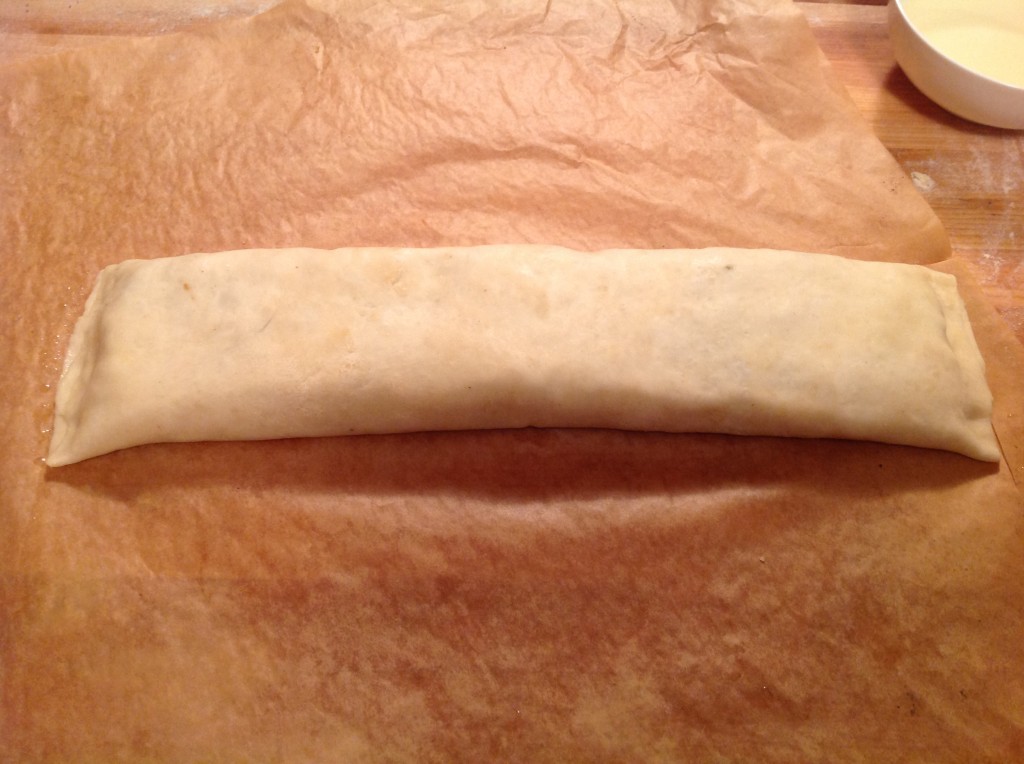 Now you will separate the knishes using an old-fashioned method. With your finger, mark the spots in the dough where you will “cut” each knish. You will get 5 knishes out of each roll so the marks are about 2 inches apart. Use the side of your hand to cut the knishes. Saw back and forth until you have gone through the entire knish and it pulls apart. This sawing method seals the knish on the cut side. 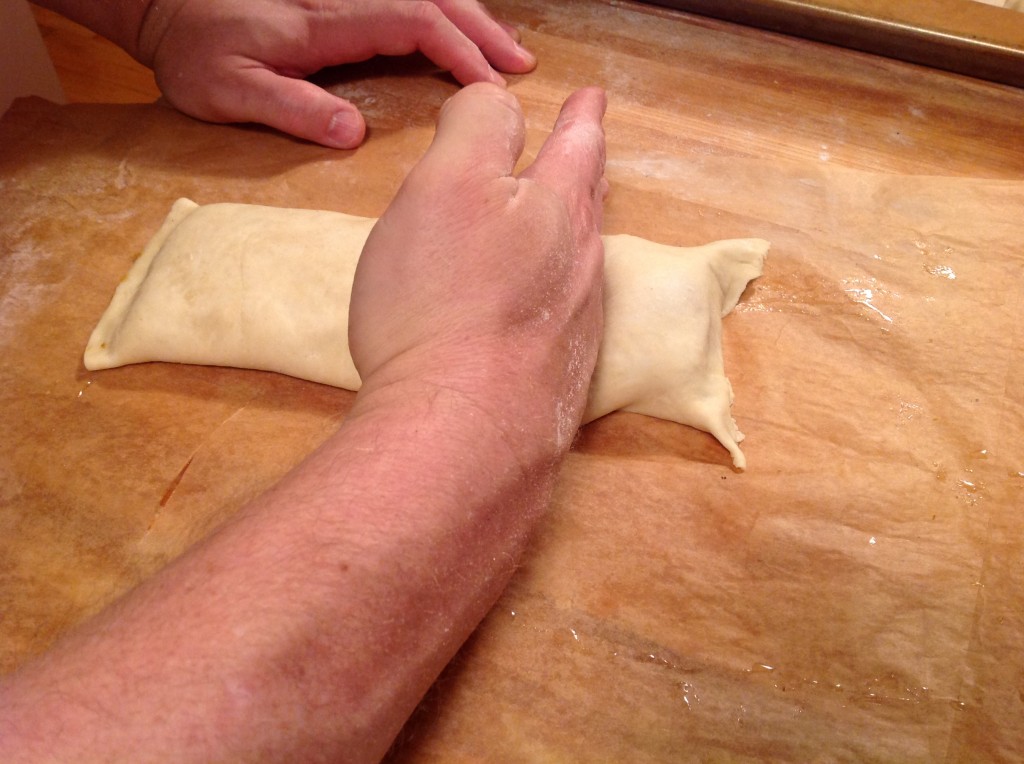 Put the knish on a parchment paper lined baking sheet. Continue with the other 4 knishes. Brush them with oil. Repeat with the other 2 balls of dough. All the trimmed dough from the balls will probably make another smaller ball of dough or 4-5 more knishes. Continue until you have used all the dough and all the filling.

Put the baking sheets in the oven and bake for 40 minutes until the knishes are golden brown. Rotate and turn the baking sheets around midway through to ensure even baking. Serve hot or cold with mustard, if desired. 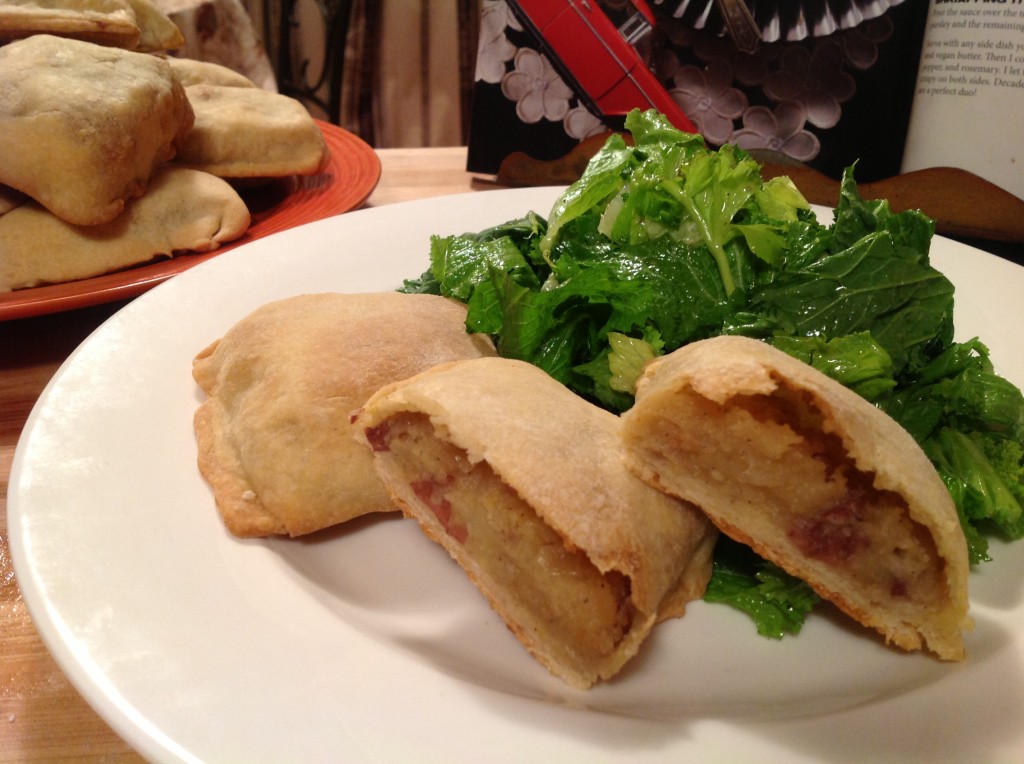