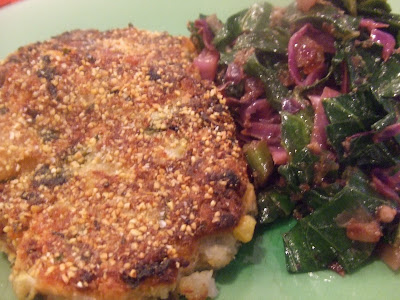 Today is St. Patrick’s Day and I supposed that meant I should cook something green. But I eat green food every single day so I decided to celebrate by trying a green food I’ve never eaten before. Okra. I had never tried okra although I’ve wanted to. But it looks strange and I had no idea what it tasted like or how to prepare it. I heard it tasted slimy. 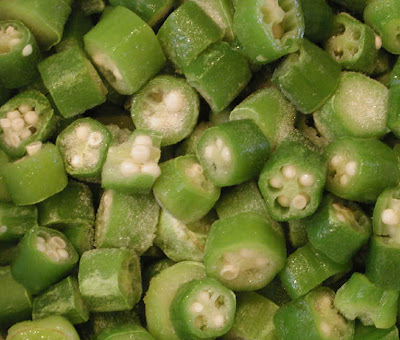 Usually when I’m going to try a new food, I like my first taste to be from somewhere that knows how to make it so I can see how it’s supposed to be done. Unfortunately, my favorite Ital restaurant, H.I.M., where they made it all the time, closed so I did some research and set out on my Green Adventure alone.

In honor of St. Patrick’s Day, the ingredients had to include potatoes and cabbage. Colcannon is a traditional Irish dish made of potatoes and cabbage or kale. So I split these main ingredients into two separate dishes. First I sauteed the okra with garlic, scallions, crushed red pepper and corn. A delicious combination. Meanwhile, I prepared a pot of cheezy mashed potatoes. Then I combined them to create cheezy potato-okra corn cakes that I dusted in seasoned corn meal and pan-fried. They were crispy on the outside, creamy and tender on the inside. 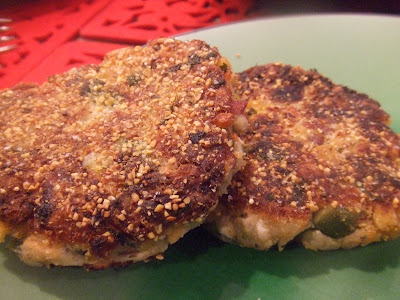 Directions
Put the potatoes in a large saucepan, fill wth cold water and add salt. Cover the pot until the water begins boiling. Then remove the cover and allow the potatoes to boil until they are fork-tender.

Meanwhile, heat a large skillet with oil. Add the okra, followed by the scallions and the garlic. Mix well. Add in the corn and the spices. Add the agave nectar (more if you like food sweet; I went shy because I don’t like sweet tastes). Saute the veggies until they are tender. Set aside to cool.

When the potatoes are tender, drain them in a colander and return them to the pot. Add the vegan cheese and mash them with a large fork. Set aside to cool.

In a large bowl, combine the cheezy mashed potatoes and the okra-corn sautee. In a separate bowl or cup, mix 2 Tbs. chickpea flour wth 2 Tbs. water to make a loose paste. This will act as a binder. Add the paste to the bowl and mix the contents well. I do it with my hands to make sure everything mixes thoroughly. 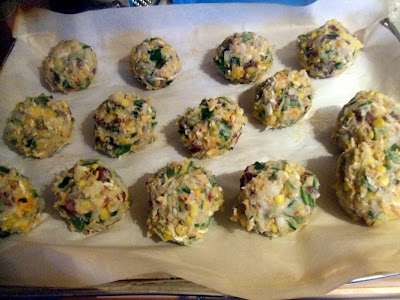 On a plate, put the cornmeal and season it with paprika and parsley. Using 2 large spoons or your hands (which I prefer), roll the mixture into good-sized balls. I got 14 balls out of the mixture but you can make them larger for big cakes or smaller for hors d’ouvres. Flatten the balls into patties and coat lightly with the corn meal. Heat a large skillet with oil and in 3 batches, fry the patties, about 4 minutes each side, until they are golden brown and crispy. Put on a paper towel to drain and sprinkle some salt on them. Serve while hot.

Then for a side dish, I sauteed red cabbage and collard greens in onions, garlic and crushed red pepper. It was incredible – the deep flavor of the greens mixed with the sweet notes of the cabbage. 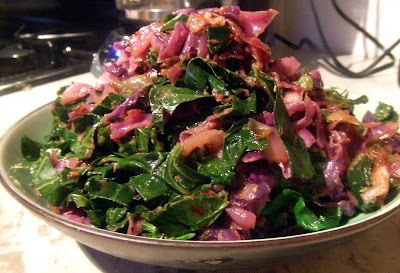 Directions
Heat a deep skillet. Add the oil. Saute the onion until softened, about 3 minutes. Add the garlic and red pepper flakes. Add the cabbage and mix well so it’s covered with the spices and oil. Add the collard greens little by little (they will wilt, allowing more room in the pot). Add salt, pepper and nutmeg. If the pot is dry, add some water or broth. Let cook until tender but still crunchy, about 7 minutes. Serve while hot.

Together, the two dishes felt both healthy and indulgent. And now I can say I like okra (at least when it’s buried in the middle of cheezy mashed potatoes; I’ll have to try them in other recipes to be sure 🙂  Tonight’s recipe was an adventure for me and I certainly had the luck of the Irish with me. Happy St. Patrick’s Day everyone! 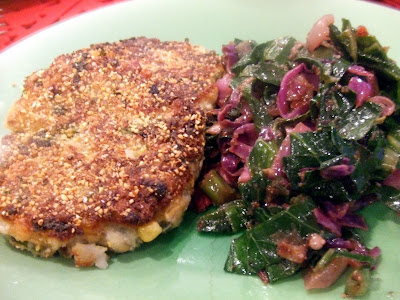