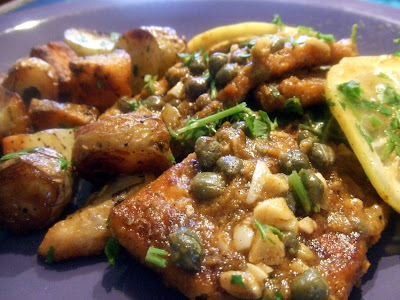 One of the best jobs I ever had was when I worked in an Italian restaurant. I was in med school and I desperately needed money for food and expenses. My father had just passed away and I was over my head in loans. When not studying, I spent a lot of my free time hanging out at a Mexican restaurant in Manhattan. A lot of my free weekend time was spent at The Rocky Horror Picture Show but that’s a story for another time. סייַ ווי סייַ, I became friends with the owner of the Mexican restaurant who kept me in free fajitas and sangria. But when I needed a steady part-time job that could work around my extremely busy and crazy med school schedule, it was a friend of his that came to my rescue.

This man, Lucho, who sometimes sat with his friends at the bar and hardly ever spoke, heard me talk about my problem. He turned to me and asked, “How much money do you need?” I looked quizzically at this older, handsome Spanish gentleman who had never spoken to me before and replied, “וועגן $100 a week.” He handed me a business card and said, “Come by tomorrow.” And that was it. He was quiet again.

I was always quiet, shy, and had low-self esteem. I grew up hearing that I was the “smart one” while my sister was the “pretty one” who got all the attention. But at the restaurant, I got the attention for being smart and for being personable. פּלוס, I am a very good listener and people love to talk. There were a lot of regulars at the bar, sort of like “Cheers.” I met a lot of interesting people – attorneys, publishers, actors, network executives, other restaurant owners – Lucho was always bragging about my studies like a proud father and he was also protective, making sure everyone treated me with respect.

They also played pranks on me. I may have been smart but I was young and not worldly. One day they pointed to an older gentleman sitting at the bar and told me, “You see that guy? That’s Mitch Miller.” I looked at the man and said, “קיין, it’s not.” They insisted and said I should go ask him. So I did. “Excuse me, Sir? Are you Mitch Miller?” The man looked at me and said, “No Dear, I’m not.” I went back to the guys and said he was not Mitch Miller. They told me he was and that he was lying to me. So I went back and asked him again. He again replied that he was not Mitch Miller. “Who are you then?” I asked. He told me his name, Skitch Henderson. “Should I know you?” I asked. He told me he was a musician. I asked him whether I would know any of his albums. He smiled and said he was a conductor. I was still clueless so he said he was on The Tonight Show with Johnny Carson. “קיין, that’s Doc Severinsen!” I demanded. Patiently, he said he was on before Doc Severinsen. “גוט,” I said and started to walk away but he asked me to sit with him while he had dinner. So I did and made another good friend, Skitch Henderson, founder and conductor of the New York Pops Orchestra. 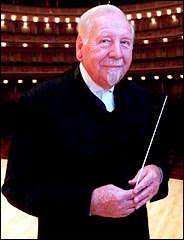 Looking back, I hear how naive I sounded but Skitch said I was sweet and refreshing. I guess he liked talking to someone who didn’t know or didn’t care about his fame or infamy (honestly, I was more impressed that William Hurt was his son-in-law). צו מיר, Skitch was just the nice man who bet me and my friend we couldn’t drive through Georgia without being stopped by a trooper (he lost that bet), who took me to dinner and casually remarked how he had dinner with Julie the night before and she would love me (he meant Julie Andrews!!) and who gave me free tickets to his perfomances at Carnegie Hall.

I have never eaten veal piccata but on our 2nd wedding anniversary, Tom and I went to Candle 79 and I had their signature seitan piccata. עס איז געווען גלייבן! They even printed out “Happy Anniversary” on our receipt and gave us free dessert. 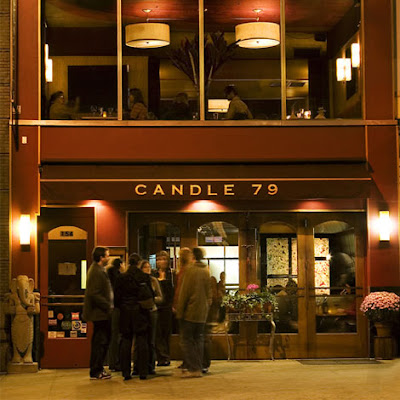 Now that I’m eating gluten-free, I created my own compassionate version of the Italian dish. Tofu cooked in a delicious sauce of Vegan butter, white wine, פּעטרעשקע, קנאָבל, lemons and capers. I served it with a side of fingerling potatoes that were crispy on the outside and creamy on the inside. This dish is so amazing, it will have people shouting, “Bravo!” and asking for an encore. 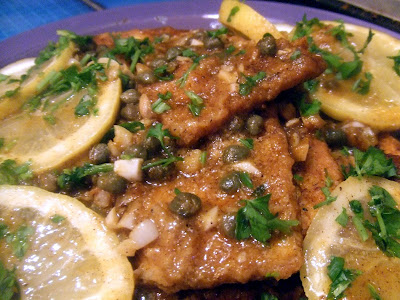 Add the wine to the pan (it is safer to take the pan off the heat when you do this) and then add the minced garlic. Cook until the garlic is slightly browned and the wine is mostly evaporated, וועגן 2 מינוט.

לייג די יויך, lemon juice and the capers to the pan. Return the tofu to the pan and let them cook in the liquid for about a minute on each side. This will allow them to soak in the flavor of the liquid. Then transfer the tofu back to the warm platter. 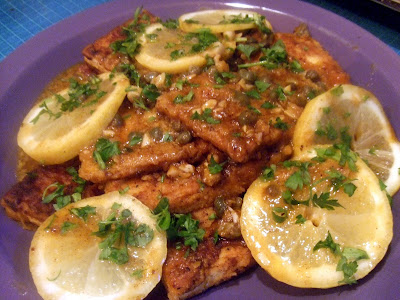 Serve with any side dish you desire. I heated a pan with a mix of oil and Vegan butter spread. Then cooked some cut up fingerling potatoes with salt, פעפער, and rosemary. I let them cook until they were brown and crispy on both sides. Decadent! Tofu Piccata and Fingerling Potatoes are a perfect duo! 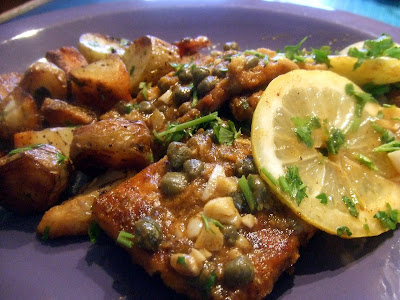