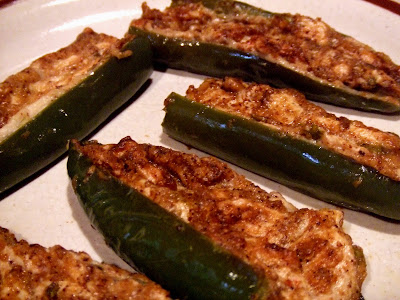 The “V” Word continues its celebration of VeganMoFo, a month of delicious food, with the other 25 letters of the alphabet. Today the letter “J” is for Jalapeno Poppers Revisited. 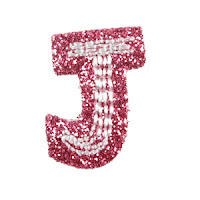 Last March I wrote a post with a recipe for my fried Jalapeno Poppers.

Well, that has become my most popular recipe post on the blog by a long shot. While my “Breaking Up with Richard Gere” is the most viewed post so far this month, my Jalapeno Poppers are right behind. And the stats for number of views for all time show that my Jalapeno Poppers may be beating Richard by only 20 views but they both have more than double the views of the next most popular post, my Eggplant Rollatini recipe.

I guess that’s not a big surprise. Anytime I post a recipe that is breaded, fried and indulgent, it gets a lot of visits and comments. My healthier recipes are just not as popular. It also helps that my Jalapeno Poppers were featured on Vegan.com and VeganEtsy. It’s much more surprising that my post about Richard Gere gets so much traffic but then again, what’s better than fried appetizers and handsome men?

But as I’ve mentioned so many times, fried food is my last vice. Whenever I feel the need for comfort food, I reach for the oil. In an effort to be able to indulge in my favorite comfort foods but not wreck my health, I decided to revisit my Jalapeno Poppers and give them a healthy makeover. So I ditched the oil, the flour, the milk and the bread crumbs. What’s left? Only the most delicious, spicy, creamy, BAKED jalapeno popper.

That’s right – no dredging, no breading, no frying. Just beautiful jalapeno peppers stuffed with a flavor-packed mixture of Vegan cream cheese, Daiya, scallions and spices. I think they actually taste better than the fried version because you can really taste the jalapeno. The taste of the pepper is not all covered up in breading and oil. These taste fresh, they actually taste healthy…well, healthier. 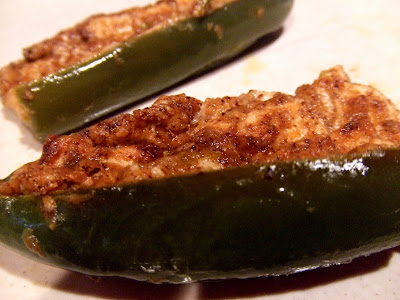 Preheat the oven to 400 degrees. Cut the stems off the peppers and slice them in half. Remove the seeds and the ribs.

In a bowl, combine the cream cheese, Daiya shreds, scallions and spices. Mix it well to make sure the spices are evenly distributed.

Bake for about 15 minutes. The peppers should be softened but not mushy. The time will depend a lot on how hot your oven gets. When the cheese is melted and the peppers are softened, they are ready to eat. 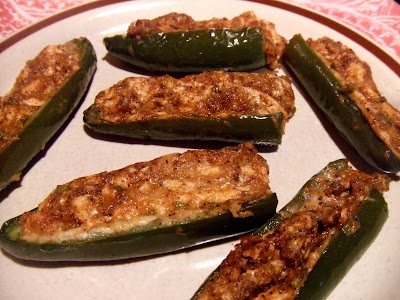 VeganMoFo: "I" is for Interview with Carol J. Adams, author of "The Sexual Politics of Meat"
VeganMoFo: "K" is for Kale, Apple and Parsnip Stuffed Squash

15 Responses to VeganMoFo: "J" is for Jalapeno Poppers Revisited