By Rhea on June 4, 2010 in Entrees, Recipes, Seitan Dishes, Thanksgiving 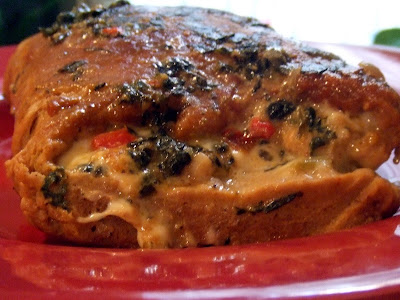 When special occasions arrive, there is usually an impressive entrée presented to the table. Vegans may find themselves choosing between a Tofurky roast or Field Roast, both of which are very good. But if you want to really impress your guests, make your own creation. This is a delicious vegan version of a spinach-stuffed roast I used to make which was always a hit but since this is Vegan, it’s even better!

I’ve been making seitan for a while now but other than forming it into cutlets or cutting it into strips, I hadn’t been very creative with it. Then I thought, “Why can’t I make a huge piece of seitan and stuff it like a roast?” So I did. It has a very “meaty” texture so if you’re missing that, great. If that’s not your thing, I have another version (which I’ll post next time) that is softer (and easier to make). Yes, it’s time consuming (especially since it will taste better if you make it the day before you eat it) but it’s well worth it. You don’t even need to have a special occasion to make it – but I’m sure you can come up with one if you have to – being Vegan makes every day a special day 🙂

Preheat the oven to 400 degrees. Next, prepare the seitan. Bring broth and soy sauce to a boil in a large covered pot.

In a large bowl mix together the vital wheat gluten, nutritional yeast and spices. Add the olive oil and mix in with a wooden spoon or fork. Add broth, soy sauce, and garlic. Mix with the spoon or fork until it forms a dough. Then use your hands and knead for a few minutes, until it stretches. Knead and shape it into a large rectangle. Use a rolling pin, if necessary, to get it as thin as possible. Cover it with a cookie sheet or pan and put some heavy cans on it to weigh it down and keep it thin while you prepare the stuffing. 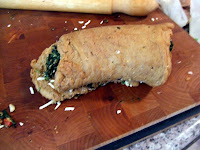 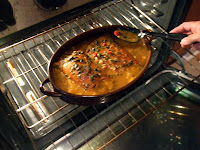 Bake for about 45 min. to an hour, basting the seitan roast often, until it looks brown and yummy and the cheese is all gooey. Carefully remove the roast from the broth-filled casserole dish and let rest for about 10 minutes before slicing.

Note: it is best to make this the day before and let the roast rest in the broth overnight. Then reheat and slice it. The texture will be better. 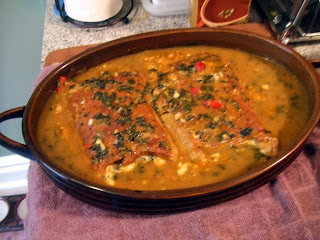 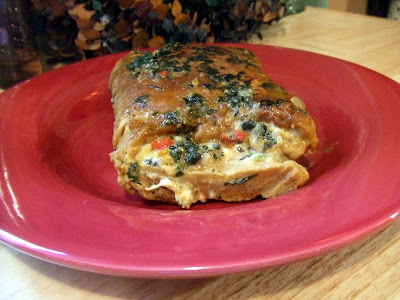 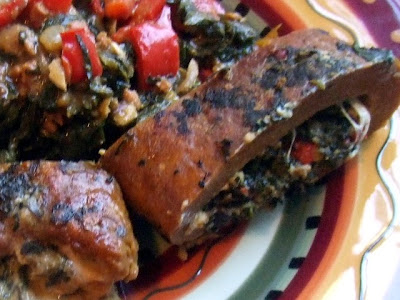