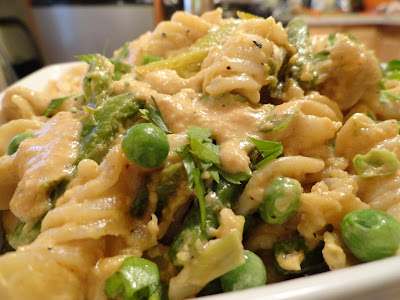 Growing up, every Sunday my mother would make two things: chicken soup with matzoh balls and a huge pot of tomato sauce for pasta. This weekly ritual represented both her heritage and upbringing: Jewish but always raised in Italian neighborhoods. In fact, my mother’s childhood best friend, Dolores (whose brother, Jackie Vernon, is the voice of Frosty the Snowman), was the daughter of a chef. He owned and ran an Italian restaurant and he taught my mother how to cook Italian food while my grandparents taught her how to cook Jewish fare.

By the time I was older and eating out, the last thing I ever wanted was Italian food. I wanted Spanish food, Jamaican food, Indian food, Chinese food, anything but Italian food. On the one hand, I was tired of it because I would have it every week. On the other hand, no one could (or still can) make a sauce like my mother’s.

On those occasions when I would get Italian food, I would order pasta in a garlic and oil sauce or a cream-based sauce. These are still my favorite types of sauce. Alfredo sauce was something I loved but ordered rarely. After all, it’s really fattening and unhealthy. I know two people who had heart attacks the day after eating Fettuccine Alfredo for dinner…seriously!

But it seemed time to make my own vegan and healthier version of an Alfredo sauce. I used raw cashews. I didn’t soak them but you could if you wanted to. They ground up fine for me without soaking. I also wanted to make the sauce soy-free so I used almond milk and if I had wanted to make it richer and smoother, I would have added coconut spread. I didn’t use the coconut spread, however, because I wanted to keep the sauce as light as I possibly could so I skipped the extra fat. Sauteing the onion and garlic before putting into the sauce deepens and intensifies the flavor. Roasting the garlic would make it even better! 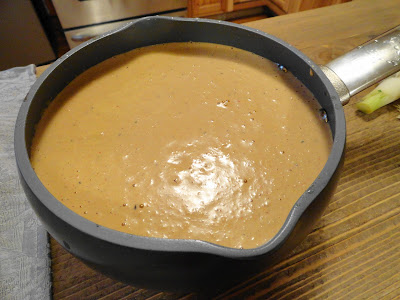 The sauce tastes rich, smooth, creamy and decadent. If you want it to have more of the traditional white color, omit the paprika. I chose a gluten-free brown rice rotini for the pasta. The spiral shape holds more sauce than a long noodle where most of the sauce just drips off. For veggies, I chose asparagus and peas but of course, you can use whatever veggies are your favorites.

My Rotini Alfredo with Asparagus and Peas is a hearty, comforting and much healthier (gluten-free and soy-free) version of an old favorite that makes me happy to choose Italian again.

Rotini Alfredo with Asparagus and Peas 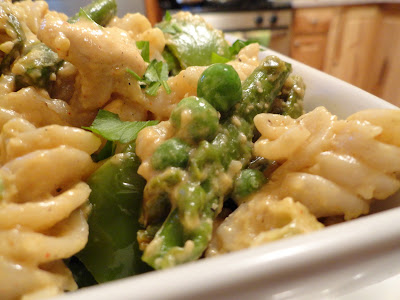 In a large pot of boiling salted water, cook the pasta according to the package directions. While the pasta is cooking, prepare the sauce. In a medium-sized saucepan, heat 2 tsp. of oil over medium-high heat. Cook the onions and garlic until they are softened and starting to brown, about 8 minutes. While the onions and garlic are cooking, add the cashews and the hot water into a food processor. Leave the saucepan out because you’re going to use it again. Pulse a few times to get the chopping started and then process until smooth, about 2 minutes.

Add the cooked onions and garlic to the food processor. Add the lemon juice, tahini sauce, mustard, nutritional yeast, paprika, nutmeg, salt and pepper and process until well combined and smooth. Taste and adjust the seasonings to your liking. Transfer the cashew sauce to the saucepan over medium heat. Stir in the milk and let cook until the sauce is to your desired thickness and consistency. If it seems to thick, add more milk. If you want the sauce to be silkier and creamier, add the coconut butter spread (or vegan butter of your choice). Reduce the heat to the lowest setting just to keep the sauce warm. 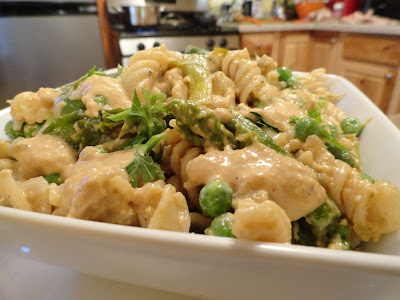 3 Responses to Rotini Alfredo with Asparagus and Peas