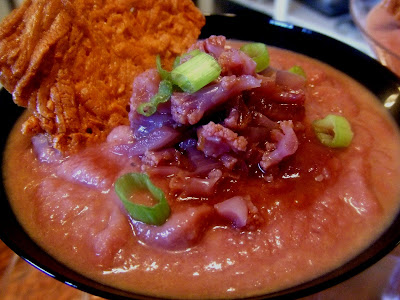 It’s now September. Summer is almost over and the weather is getting cooler already. Then again, some days have been hot and muggy. The produce sections of the supermarkets and the farmer’s market stands illustrate the coming change of seasons. The bright yellow and green summer squash rest next to the deeper yellow butternut and winter squash. Pumpkins share the table with juicy beefsteak tomatoes and sweet basil.

Last week I found the most gorgeous heads of cauliflower in different colors. There was a bright orange one, a regal purple one and a pretty green one that was actually a hybrid of broccoli and cauliflower. I bought the orange and the purple heads and then struggled with what to make with them. The colors were so beautiful that I felt like I should only use them in a way that would best highlight their amazing colors! 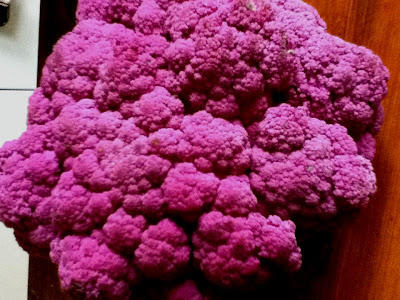 Since yesterday was a little cool out, I decided to make a cauliflower soup – a PURPLE cauliflower soup. I was curious to see what color the soup would end up. It turned out to be not quite purple but more of a deep, dark pink color, almost like a frozen dacquiri 🙂 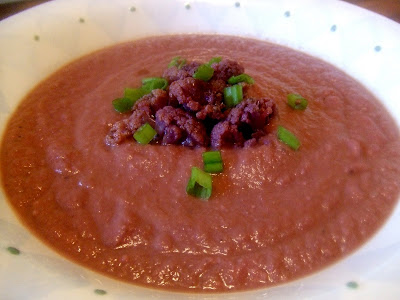 Some recipes for cauliflower soup use pork and add cheese but this Vegan soup leaves the pigs and cows alone. I kept the recipe simple to bring out the natural flavors of the vegetables. And instead of adding any cheesy taste into the soup itself, I made some Cheddar Crisps out of Daiya shreds for a crunchy cheesy garnish. 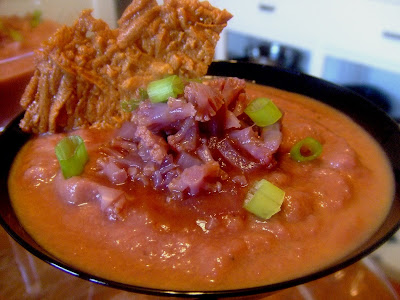 My Purple Cauliflower Soup was creamy and delicious. Plus it is so versatile. It’s a light but filling dish for a cool summer’s day. On a warmer day, it would also make a healthy and refreshing chilled soup. And when the weather gets colder, roasting the cauliflower first would result in a richer, deeper-flavored soup sure to warm you up.

One of the most fun things about making compassionate Vegan food is getting to play with all the brilliant colors available. My friend, Colleen, called this my “Color-flower” Soup. I like the sound of that. You’ll love the look and the taste of it. 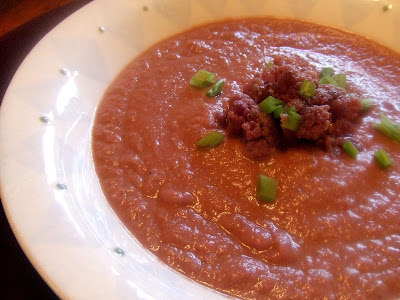 Heat the oil in a soup pot over medium heat. Add the onion and garlic. Let them cook about 5 minutes until softened but not browned.

Add the cauliflower and the vegetable broth. Bring the soup to a boil. Then reduce to a simmer and cook covered about 20-30 minutes until the cauliflower is falling apart.

Remove the soup from the heat. Take out about ½ cup of the cauliflower and set aside for garnish. Puree with an immersion blender (or a regular blender) until the soup is smooth.

Note: if using a regular blender, remove the soup from the heat and let cool for about 5 minutes. Transfer the soup to the blender and fill it half-way. Leave the lid open a bit when you puree the soup. Place a towel over the top of the machine, pulse a few times then process on high speed until smooth.

Serve soup in bowls with some of the reserved cauliflower and chives for garnish. Add a cheddar crisp, if desired. 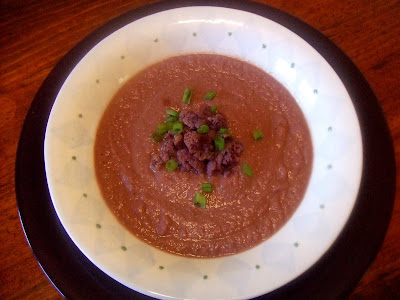 To Make the Cheddar Crisps: 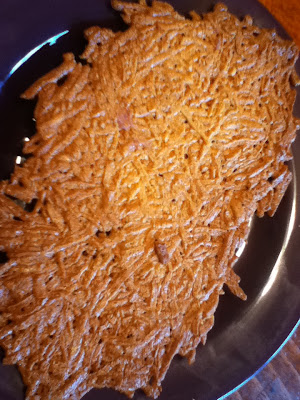 Preheat the oven to 350 degrees. Cover a baking sheet with aluminum foil. Spread a thin layer of the cheddar shreds on the baking sheet. Bake until browned and crispy, about 15 minutes. Keep an eye on them so they don’t burn.

Break the sheet of crisp into large pieces and garnish each soup bowl with one. 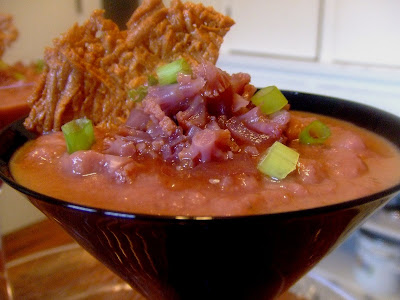