This sad story is what happens to over 9 million cows each year. They are repeatedly forcibly impregnated and have their babies stolen from them, stripping from them their rights to be mothers to their children. Cows grieve strongly. Research has shown that the removal of a calf is the worst thing that can happen to a cow. In his book, An Anthropologist on Mars: Seven Paradoxical Tales, neuropsychiatrist Oliver Sacks tells the story of his visit to a dairy farm with Colorado State University Professor of Animal Science, Temple Grandin. Hearing the cries of these grieving mothers and babies, Temple Grandin said, “That’s one sad, unhappy cow. She wants her baby. Bellowing for it, hunting for it. She’ll forget for a while, and then start again. It’s like grieving, mourning – not much written about it. People don’t like to allow them thoughts or feelings.”

One person who has written about the mother-child relationship in animals is Jeffrey Moussaieff Masson. In his books “The Pig Who Sang to the Moon: The Emotional World of Farm Animals” and “The Face on Your Plate: The Truth about Food,” Masson explores the strong bond between mother and baby and the devastation that occurs when it is broken. Beautifully written, with passages from Shakespeare to the Torah, Masson’s books are among my favorites. He is one of the few authors who has studied the process of denial in humans. How is it that humans do not see the torture inflicted upon these animals, these mothers and babies? How do people eat veal, knowing it is a baby calf? Or suckling pig? Infants suckle. How is that connection not made? Or is it made and then repressed? 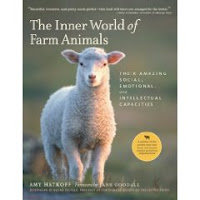 Another author who writes about the mother-child bond in animals is Amy Hatkoff. Hatkoff is a child and family advocate, parenting educator, author and filmmaker. In her new book, “The Inner World of Farm Animals: Their Amazing Social, Emotional and Intellectual Capacities,” Hatkoff “challenges us all to reconsider the way we think about and treat farm animals. Combining the latest research with touching stories and beautiful photographs, the book makes a plea for treating these beings with compassion and respect.” This is one of the most beautiful books I have ever read.
Most people in a society are against child abuse. Evolutionary theory says that humans are hardwired to attach to babies in order to ensure their protection and their survival. Certainly, most people will smile and say “aww” when they see pictures of babies, both human and non-human. Not everyone is enamored by chickens but most people think little yellow baby chicks are cute. Baby pigs, puppies, kittens, tiny baby birds – we think they are adorable. We buy our children stuffed animals that look like them, we love to look at pictures of them, and then we torture, murder and eat them? We tear a baby from its mother, slaughter them both and then feed them to our own children under the guise of loving parenting? Something is wrong with this.

Animals used for food do not get to live out their lives to their natural life span. A cow used for beef could live up to 25 years but is slaughtered before it reaches 2 years old. Dairy cows get to “live” until they are spent and can no longer produce profitable quantities of milk and are then killed by 4 years old. Their babies marked for veal only get to live a few months at most. Pigs have a natural life span of 10-15 years but are turned into ham, bacon and sausage by 6 months of age. Broiler chickens can live 2-5 years but are killed at 6 weeks for their meat. Egg-laying hens have an average life span of 10-12 years but when they are spent and can no longer produce a profitable number of eggs, they are sent to slaughter. Most don’t get to live even two years. Their babies also suffer tragic fates. Male chicks are useless to the egg industry and are killed, often on the very day they are born, by being thrown away in garbage bags or thrown into wood chippers while still alive.

Child abuse is a horrible occurrence that needs to be prevented. I have dedicated most of my adult life to being an advocate against child abuse. Treating victims and teaching prevention, parenting and child psychology classes, I try every day to reduce suffering in the world. Perhaps it is a passion of mine because of my own childhood abuse. I cannot stand the thought of any child suffering. Children and animals are often compared – they are both innocent, vulnerable and at the mercy of adults. They both deserve protection. They both deserve the chance to live safe, happy lives. They both deserve life.

In the words of Sri Aurobindo, “Life is life – whether in a cat, or dog or man. There is no difference there between a cat or a man. The idea of difference is a human conception for man’s own advantage.” Let us save the children, ALL the children.

4 Responses to Save The Children